The stunning epic fantasy inspired by the author’s Moroccan heritage about a poor girl who must become the body double of a princess of a ruthless empire hailed as ”a rich, dazzling, powerful debut” by Tahereh Mafi, the New York Times author of the Shatter Me series

In a world dominated by the brutal Vathek empire, eighteen-year-old Amani is a dreamer. She dreams of what life was like before the occupation; she dreams of writing poetry like the old-world poems she adores; she dreams of receiving a sign from Dihya that one day, she, too, will have adventure, and travel beyond her isolated home.

But when adventure comes for Amani, it is not what she expects: she is kidnapped by the regime and taken in secret to the royal palace, where she discovers that she is nearly identical to the cruel half-Vathek Princess Maram. The princess is so hated by her conquered people that she requires a body double, someone to appear in public as Maram, ready to die in her place.

As Amani is forced into her new role, she can’t help but enjoy the palace’s beauty—and her time with the princess’ fiancé, Idris. But the glitter of the royal court belies a world of violence and fear. If Amani ever wishes to see her family again, she must play the princess to perfection…because one wrong move could lead to her death.

About: Mirage is a young adult fantasy written by Somaiya Daud. It will be published on 8/28/18 by Flatiron Books, an imprint of Macmillan Publishers, 320 pages. The genres are young adult, fantasy, and science fiction. This book is the author’s debut and is intended for readers ages 13 to 18. According to the publisher’s website, “Flatiron Books is committed to publishing intelligent fiction and nonfiction with commercial appeal by authors with distinctive voices.” It is “named after the historic building in which the company is housed.” Please see below for more information about the author and publisher.

My Experience: I started reading Mirage on 4/6/18 and finished it on 4/14/18. This book is an excellent read! I love that there’s a village on the moon. The body double is interesting to read, especially when Amani learn her subject mostly by observation. She doesn’t know the inside secrets of what Princess Maram revealed to her fiancé and friends. I like Idris and his cleverness. I like how Amani hold on to her language and culture like a precious stone and Idris regrets forgetting his mother’s tongue. “You can read?” “My mother taught me.” It’s a good reminder to me because as I live in a country I was not born in, I lose the feeling of importance to teach my son the language and culture I was born with because I want him to succeed where he born and lives.

This book is told in the first person point of view following Amani, 18, as she gets ready to attend the majority night celebration to celebrate her and fellow villagers’ coming of age by getting a face tattoo (daan). She lives on a poor forgotten moon in a small village with her parents and two older brothers in a tribe. The party was ambushed by droids and then Amani got taken away against her will leaving her family and all she’s known behind. She soon learns that she will become the body double for the wicked and cruelest Princess Maram, 17. Princess Maram’s life is in danger because she was born 50/50 between good & evil and since they both look alike, Amani is suited for the job. Amani will have to endure many harsh training lessons to eat, talk, and walk like Princess Maram. There are different cultures and languages in this book. Some languages are forbidden and some cultural practices are prohibited. The current King is ruthless and there are rebels that want to overthrow the King and Princess Maram. Amani is put to the test when she begins to journey to faraway places for an extended period of time as Princess Maram, but her challenge takes an unexpected turn where she least expected it.

A well written story, this book introduce an interesting plot and an unfamiliar language/culture to challenge readers. I have to admit that my pronunciation of names and locations in this book sounds as foreign to me as it looks. Nevertheless, it’s interesting to unravel how a village girl saves herself from her face when she no longer has her freedom. I like the forbidden love portion of the book as well as the importance of valuing your own history. I like that Amani know so much of everything even though she lives in a village far away from the city. I like the dispute Princess Maram struggles with, between good and evil and not knowing which direction to follow. The ending is a bit heart breaking as well as hopeful. I look forward to the sequel of this book. I highly recommend everyone to read this debut! 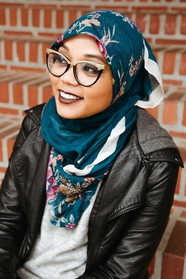 Somaiya Daud is a twenty-something writer and PhD candidate at the University of Washington. A former bookseller in the children’s department at Politics and Prose in Washington, DC, Somaiya is passionate about Arabic poetry, the stars, and the Gothic novel. Mirage is her debut novel. https://twitter.com/somaiyadaud

***Disclaimer: Many thanks to Flatiron Books for the opportunity to read and review. Please be assured that my opinions are honest.