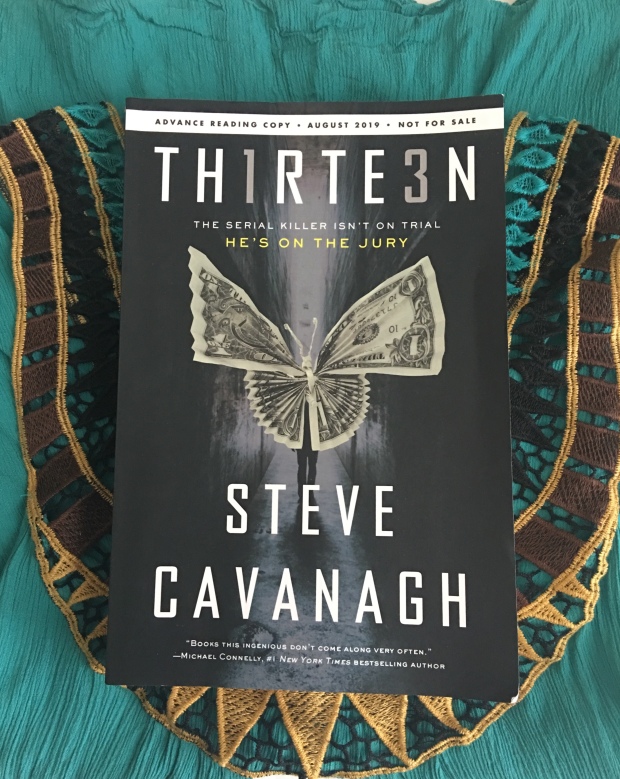 It’s the murder trial of the century. And Joshua Kane has killed to get the best seat in the house – and to be sure the wrong man goes down for the crime. Because this time, the killer isn’t on trial. He’s on the jury.

But there’s someone on his tail. Former-conman-turned-criminal-defense-attorney Eddie Flynn doesn’t believe that his movie-star client killed two people. He suspects that the real killer is closer than they think – but who would guess just how close?

About: Th1rt3en is a legal thriller written by Steve Cavanagh. It will be published on 8/13/2019 by Flatiron Books, an imprint of Macmillan Publishers, paperback, 336 pages. The genres are fiction, thriller, and legal. Thirteen is book 4 from a series called Eddie Flynn where book 1 was called The Defense, book 2 was called The Plea, and book 3 was called The Liar. According to the publisher’s website, “Flatiron Books is committed to publishing intelligent fiction and nonfiction with commercial appeal by authors with distinctive voices.” It is “named after the historic building in which the company is housed.” Please see below for more information about the author and publisher.

My Experience: I started reading Thirteen on 4/26/2019 and finished it on 4/30/2019 at 12:53am. This book is a fantastic read! I love the two point of views with the lawyer and the killer. I love that both main characters are smart and knowledgeable as well as the supporting characters. I love learning that the career choice of being a defense lawyer can be life threatening and could potentially break up a family. I like that there are definitions and detailed explanations to courtroom actions, such as what a rogue juror is.

The story begins with the first person point of view following Eddie Flynn as he defends a lady on drug possession in a courtroom. He won the case and then got invited to be part of the largest murder trial ever, a celebrity being accused of double murder. The alternative view told in third person is the killer. He took time to study who the jurors will be and did the steps to become him. His process is also presented in the prologue of the story. The book is organized into 5 days of the week covering the length of the murder trial.

Thirteen is very well written and such an adrenaline rush read! I enjoyed the courtroom twists with how the evidences are presented. I like how the lawyer work through solving a puzzle and finding a pattern to a problem. I enjoyed the humor between the lawyers in the courtroom. It’s fun when Eddie analyze what the other person is saying or not saying because it shows that he’s clever to figure out the silent meaning behind the words. This book is definitely a page turner and I highly recommend everyone to read it.

Steve Cavanagh is an Irish author from Belfast and at the age eighteen he studied law by mistake. He is now the international award-winning author of the Eddie Flynn novels. His debut novel, The Defense, was nominated for the Ian Fleming Steel Dagger Award for Thriller of the Year, and The Plea won the Prix Polar Award for Best International Novel. Steve is still a practicing lawyer (someday he’ll get the hang of it) and co-host ofthe chart-topping podcast Two Crime Writers And A Microphone. He has been involved in several high-profile civil rights cases, his Eddie Flynn novels have been published in over twenty countries, he’s married with two young children, and in his spare time he is mostly asleep. (Photo and info obtained from Macmillan’s website).

***Disclaimer: Many thanks to Flatiron Books for the opportunity to read and review. Please be assured that my opinions are honest.